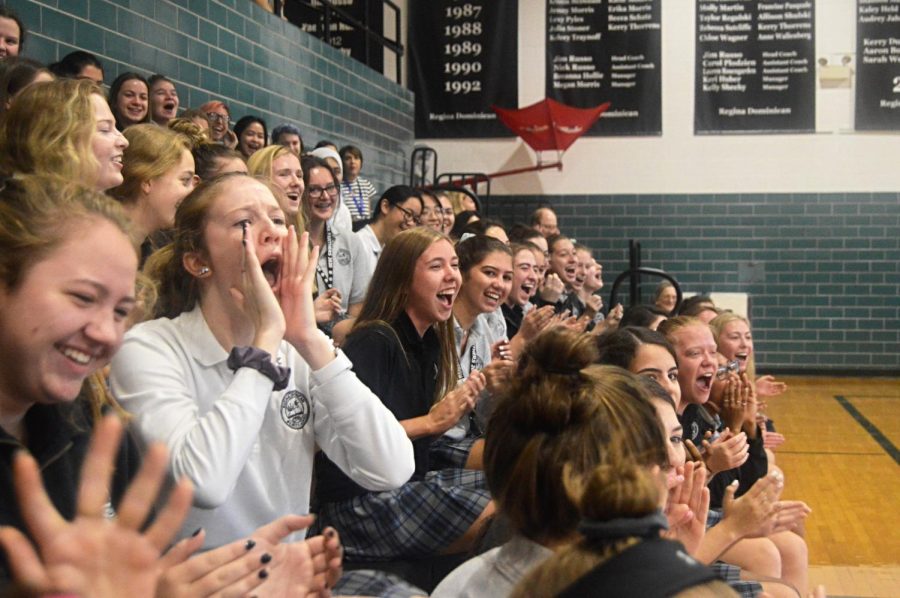 Caroline Spellman, '20 gets into the spirit during Raffle Kickoff.

The 2018 Raffle season is here! Every year, Regina students sell tickets to raise money for a certain project or item to add or fix at Regina Dominican. This year’s goal is for each student to sell $150 or 30 tickets. If all students sell their tickets,  the school will reach its total goal of raising $36,000

Anyone who purchases a ticket gets automatically entered into a drawing. The grand prize of $3,000;  second prize is $1,500, and third prize is $500. Similar to last year’s raffle, tickets can also be purchased online.

Although some students prefer the paper ticket, many enjoy the flexibility of buying tickets online. Junior Ashley Richards comments, “I think that the online tickets are awesome because my relatives live in different states, so if I wanted to send them some, it’s easier to send them a link rather than send them the physical tickets. It’s also a lot easier for my mom to fill out the ticket information online, and it’s a lot less time consuming.”

Before the raffle kick off, each student was asked to fill out a survey to vote on the one item they wanted to the money raised to go to.  The options included: upgrade the water fountains, get additional new chairs and desks in selected classrooms, repair and replace ceiling fans in the gym, or refresh and repair the locker room.

The Raffle Kickoff event was held on September 25 where it was revealed that the money would go to new water fountains with some of the money used to update the locker rooms.

The day of the Raffle Kickoff was a big hit for all grades. Each grade level competed in a lip sync battle with different songs, including: “I Like It” (clean) by Cardi B (freshmen), “Unwritten” by Natasha Bedingfield (sophmores), “We R Who We R”  by Kesha (juniors), and “Mo Bama” (Clean) by Sheck Wes (seniors).  After the students performed, several faculty members performed the Spice Girls’ “Wannabe.”

The second part of the kickoff included each class participating to be named the most spirited. Initially, the Seniors were declared the winners, but many in the audience felt the spirit award should be presented to the juniors.  A rematch between the two grades was initiated in an all-out lip sync battle. Each grade asked for more of their classmates to participate. The juniors played “No Hands” (clean) from Waka Flocka Flame and Roscoe Dash and the seniors sang to “Fefe” (clean) from 6ix9ine.

Both the seniors and juniors felt they won the final battle and all students walked out of the gym singing, Queen’s “We are the Champions.”

Senior Diana Makdah tells of her thoughts at the Kickoff, “This pep assembly was really competitive and spirited. Everyone in each grade really cheered for each other in order to win the lip sync battle. I was happy that everyone was getting involved, but, of course, I wanted the Seniors to win. It was, overall, a successful pep assembly.”

After the Raffle Kickoff Assembly, Angelina Adamo ‘20 stated, “I thought it was the best one yet. I couldn’t stop laughing and having fun so early in the morning!”

After her first time being at a Regina Pep Assembly, Freshmen Abbey Schurr remarks, “I really liked it, especially because it was in the morning, and I think it really put all of us in a good mood for the rest of the day. And, I loved watching everyone’s performances, especially the juniors. I wish I was a part of the freshmen group, but I can’t wait for the next one.”

Don’t delay to sell or buy tickets! The last day is October 18th!