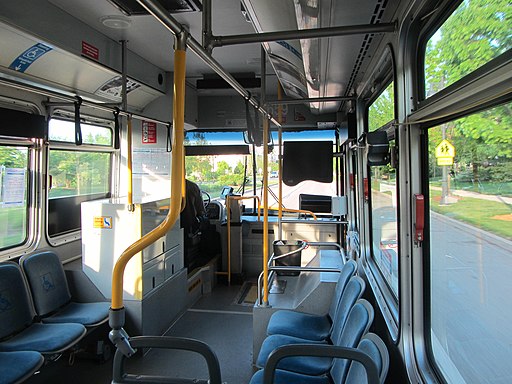 For the past three years, I have gone to Regina Dominican, the scheduled Pace Bus has been my mode of transportation both to and from school. There are two bus routes that have Regina as a destination in the mornings: one route leaves Northwest Chicago at 6:44 and the other route is at 6:54. During the route, many people are picked up at random stops along the way.

According to pacebus.com, the first school destination is Loyola Academy, with the bus arriving around 7:19 a.m. to 7:30 a.m. depending on which bus is taken.  This gives the bus roughly around 9 minutes to get to Regina between 7:28  a.m. to 7:39 a.m.

The first bus that picks up people in the morning is completely filled within a block of leaving the station. Typically, there is nowhere to sit and many people will have to stand often while holding onto each other sometimes. The second and later bus is nearly empty when I get on, giving me a place to sit or do work and study. When it is that early in the morning, that is usually when people would want a chance to sit down.

The Regina school schedule has changed to an earlier starting time. Instead of starting at 7:53 a.m. with a short advisory and announcements, the schedule now begins with a first-period class at 7:48 a.m.

Thankfully, I have my first-period class as study hall which means that I am not missing any instructional time, but if it were any other class, I would be missing out on lessons nearly every day. This year, with the schedule change, it has been especially hard for me to get to school on time without any control over it.

After school is an even worse situation. Some days the bus does not even come. Regina Dominican students get out at 3:00 and the destination and leaving time for the bus is supposedly 3:15. The girls who take the bus after school have to walk to the other end of the school and the bus driver stops at Lake and Locust, even when snowing or raining at 3:15 p.m.

Most of the time, the bus does not come on time and even sometimes does not come at all. This means that students are waiting outside for up to over an hour for their ride home without knowing if the bus is even coming or not. Many of these students have after school activities or work that they need to do and cannot even participate in them because the bus is either too late or never comes.

In many circumstances, parents will have to pick them up from school, which means parents have to leave work early because of transportation complications. There is no way to control when the bus comes or leaves either, so when parents try to call the school, the school is unsure of if the bus came on time, late, or not at all.

Regina has called Pace about these problems, and Pace’s explanation is that they will have it handled. For a short time, the buses are on schedule; however, as time passes, it starts all over again and students have no way to get home.

Many mornings have occurred in which I have gotten unexcused tardies because the bus has arrived late to school. With my bus ride being an average of an hour-long, it is difficult to tell if it will arrive at Regina on time. If my parents were not taking the time out of their mornings to call in and excuse me while also taking my younger siblings to school and going to work to call in, I would be going to detention nearly every day after school and not getting home until approximately 6:00 p.m.

A Pace Bus Service representative was contacted regarding this issue but did not respond. The Pace Bus Service is the only way that many students can get to and from Regina Dominican. Here is hoping that Pace will start the new year with timely bus schedules!