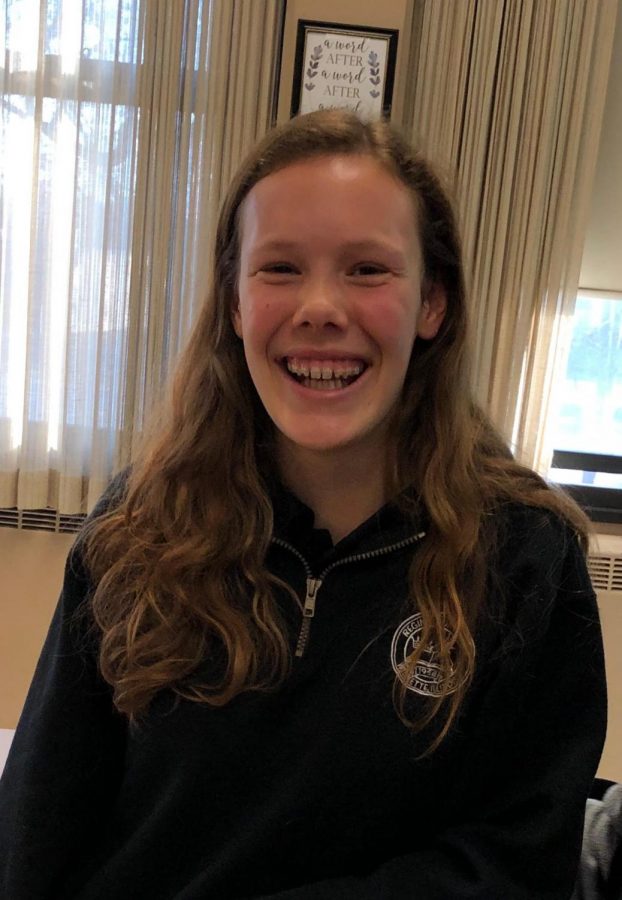 Alice Dimouchy is one brave fifteen year old as she traveled 4,377 miles to a foreign country by herself. She is from Loures, France and was given the opportunity through WEP (World Organization Program) to travel to and study in the U.S.

Alice came to the U.S. on October 13 and will return home to France on December 15. While in the U.S., she stayed with a host family in Glencoe. When asked how her stay here was different from her life at home, Alice remarked that she found it strange that her host family did not eat together, but instead ate dinner when it was convenient for them.

Not only was the family dynamic a bit of a shock for Alice, but so was attending school. Before coming to Regina, Alice had never attended a school where she would be speaking primarily English, which is her second language.

Speaking primarily English was an adjustment, but there were also other adjustments in school that Alice made.

For one, the length of the school day is much longer in France, with it beginning at 8:00 a.m. in the morning and ending at 5:30 p.m. at night. That is very different than the standard U.S. school day of 8-3.

Alice said that in the U.S. there is more time for extracurriculars and relaxing, which she enjoys. She commented that it was unusual to her to see students at Regina having an hour or two of practice for a sport per day whereas in France, there would be a two hour practice for the week.

Although Alice enjoys the shorter school days and meeting new friends, she is excited to return home for the holidays to see her family and friends.

Alice says that she had an amazing time in the U.S., and she would recommend the foreign exchange program to others. She also added that she would love to temporarily live in the U.S. after she attends university.

Alice said that she loved being at Regina and that overall, it has made her a more confident person. She commented that she loved how the school teaches its students to be good people. She says she wished that in France there could be less stress placed on getting grades and instead more emphasis on being a good human being.

From the Regina community, we hope you have a safe trip home Alice. Au revoir!