What The Pledge of Allegiance Really Means To Americans 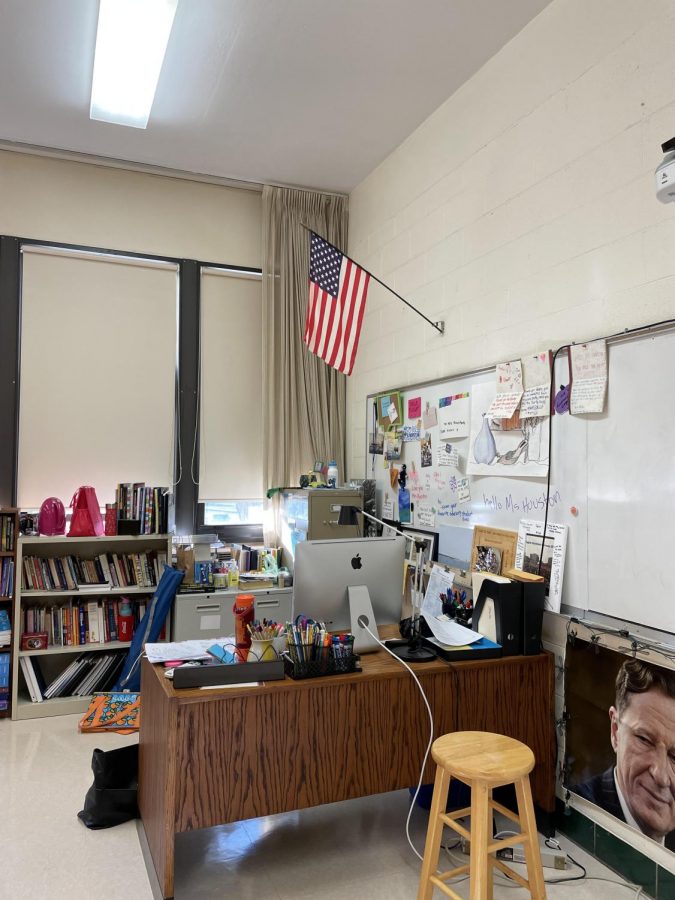 Inside every classroom is an American Flag

“I pledge allegiance to the flag of the United States of America, and to the republic for which it stands, one nation under God, indivisible, with liberty and justice for all.”

We have all heard the Pledge of Allegiance and chances are, as high school students, we most likely have recited that pledge several hundred times in our lives. The Pledge of Allegiance was originally written by a Civil War veteran named Colonel George Balch. Balch wrote the rough outline of the pledge; however, Francis Bellamy in 1892, revised it to look somewhat how it does today. Bellamy wrote the pledge to commemorate the 400th anniversary of Christopher Columbus coming to the Americas. Since then, it has been edited and updated by a multitude of people, in order to have the best version possible. The pledge we all know was most recently updated in 1954. For many Americans, the Pledge of Allegiance is a representation of unity, hope, and loyalty to the United States.

Public and private schools may still starts their day reciting The Pledge of Allegiance. However, In 1943, the U.S. Supreme Court decided that public school students are not under any obligation to recite the pledge due to their First Amendment right. Controversy and criticism have followed the saying of The Pledge of Allegiance based on religious and political as well as inequality issues.

For me, by standing up and saying the pledge, I am recognizing the sacrifices that were made by our troops to make this country what it is today.

Junior Latrisha Taylor strongly believes that the pledge and the flag represent a “lie,” and anyone who stands during the Pledge of Allegiance is “supporting a huge lie.” This lie that Latrisha is referring to is the promise that “liberty and justice is for everyone- when in reality, it’s not.”

The Flag might not even hold any significance to someone at all, such as junior, Sid Guadarrama. He believes the “foundations of this country have been built upon mistreatment and inequality.” In fact, Guadarrama goes as far as saying, “I don’t think anybody should worship a flag because there is a good and bad side to everything. People waving around a flag like it’s a part of who they are.. I just feel like people shouldn’t do it.”Something else Guadarrama said that highlights how people become so passionate about the Pledge of Allegiance is, “This is what I believe, and I’m not gonna be ashamed of what I believe.”

A student from a military and police family sits down during the Pledge of Allegiance. She indicated that she believes that sitting down for the Pledge of Allegiance is a protest towards the Government, the Archdiocese, and some Regina Dominican guidelines as well. She would also like to point out, “the reason why a lot of people- and why me, personally- are sitting, is not to mean any disrespect towards veterans or cops… if I can’t stand with them (people of color, LGBTQ+, and women, and other marginalized people), I’m sitting.”

Gabi Kerrigan, a Regina junior, is an individual who stands for the Pledge of Allegiance, however, she doesn’t think that sitting for the pledge reflects poorly on the military- because the military is not the only thing our flag represents.

Theology teachers at Regina,  Mrs. Toomey and Mrs. Boris, said that the American Flag is a “symbol of our country’s shared values, which we intend to embody. It is a visual symbol of our country, while the Pledge is the verbalization of those same values.”

Mr. Doles is another theology teacher at Regina Dominican. Some of the classes he teaches include: Catholic Social Teaching, Morality, Foundations of Faith, and Hebrew Scriptures. Mr. Doles said, “For me, this whole issue revolves around allegiance, and who I pledge my Allegiance to. At the end of the day, my allegiance doesn’t lie with any nation- my allegiance lies with God and with Jesus Christ. I also don’t want to be disrespectful, so I stand. I try to take a respectful posture, I turn and face the flag. But I don’t usually say the Pledge of Allegiance. What I just do instead is say the “Our Father” in my head.”

According to Catholic.com, “Patriotism is a form of piety—the acknowledgment that we owe our gratitude to God, our family, and our nation for the gift of life and sustenance. We owe our lives to God, our parents, and to a country that provides the soil and cultural structures for communal living. Piety—and, deriving from it, patriotism—renders the affection and loyalty due to our benefactors. Patriotism is indispensable to our love of God and neighbor.”  This quote is implying that the act of being patriotic, is truly a reflection of how much we value and appreciate our lives, in honor of our devotion to God.

Colleen Reese, a mother of two Regina girls (one alum and one current), argues that students should stand and recite the Pledge of Allegiance together. She said, “the Regina Dominican community should be advocating for a time to reflect on the reasons we were able to send our girls to Regina in the first place. The girls should be reflecting on the many opportunities they’re blessed with, rather than neglecting and ignoring their responsibilities. It is a privilege and an honor to be able to stand for our flag. The world today no longer practices traditional acts of common decency between each other. To me, this explains the absence of basic kindness, respect, and civility that we once showed each other. Something I have always instilled in my daughters is; whatever you do, do so with civility and respect.”

Andre Perry, a columnist of the Hechinger Report of various race and equity articles, states, “as a parent I applaud children, including my own, who protest the disparities they see everyday.”

Since the official ruling in 1943, there has been more of a pushback in standing for the pledge. However, over the last decade or so, sitting down during the pledge has been become more and more common. The most well known modern defiance of the Pledge of Allegiance or the National Anthem was enacted by Colin Kaepernick, a modern civil rights activist, as well as a previous quarterback for San Francisco’s 49ers. He kneeled during the National Anthem on the sidelines before a football game in 2017. Since then, he has been shut out of the league, and continues to fight for the racial injustices regarding police killings of black people.

Kaepernick said, “I am not going to stand up to show pride in a flag for a country that oppresses black people and people of color.”

Many school students have been impacted by different news stories from around the country. to demonstrate their frustration, they sit in defiance of the country, and what the flag stands for each of them.

Regina also reflects the national trends compared to a few years ago.  In the course of two years since I was a freshman, as anecdotal evidence, I have noticed a large percent of students now sitting during the Pledge of Allegiance, which is noticeable at Wednesday morning meetings.

The video below from Fox News discusses a young girl from Texas who sued her school when she was expelled for sitting during the pledge. The state of Texas supported the school’s decision. The student and the school settled the case in December 2018. The details remain confidential