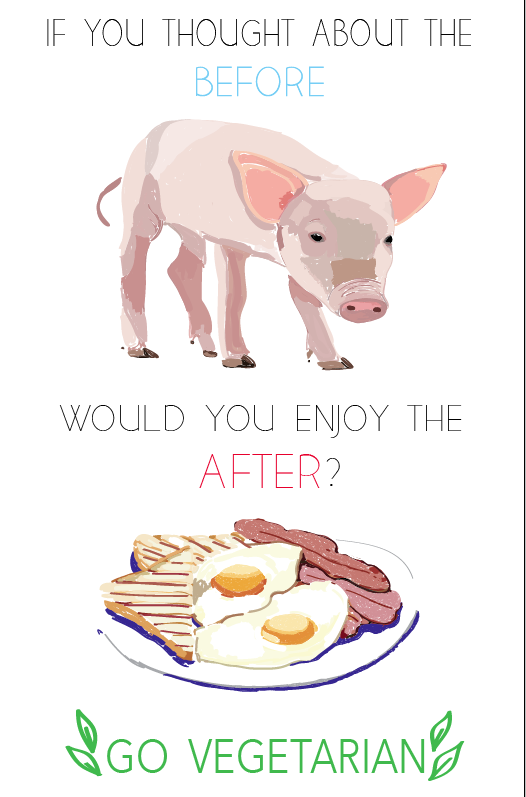 Animal cruelty is becoming a much more prevalent issue in today’s society. There are more people advocating for the ethical treatment of animals, which includes ending animal testing on beauty products or publicizing the benefits of becoming a vegetarian.

The organization People for the Ethical Treatment of Animals (PETA) is a huge advocate for a vegetarian diet. They provide the public with a multitude of resources for those who are thinking about switching to a meat free diet. PETA explains that there are many alternatives for vegetarians, proving that it isn’t that hard to become a herbavore.

“There are vegetarian alternatives to almost any animal food, from soy sausages and “Fib Ribs” to Tofurky jerky and mock lobster,” explains PETA.

There are increasingly more vegetarian and vegan restaurants today. Also, many restaurants offer vegetarian items (even Burger King offers it patrons veggie burgers!). Not only is a vegetarian diet healthy for you, but it is also what is best for animals. PETA states that every year, over 27 billion animals are slaughtered.

“Raising animals on factory farms is cruel and ecologically devastating. Eating animals is bad for our health, increasing the risk of developing various diseases and illnesses, including heart attacks, strokes, cancer, diabetes, and obesity,” PETA elaborates.

“Animals on factory farms are treated like meat, milk, and egg machines. Chickens have their sensitive beaks seared off with a hot blade, and male cattle and pigs are castrated without any painkillers. Farmed chickens, turkeys, and pigs spend their brief lives in dark and crowded warehouses, many of them so cramped that they can’t even turn around or spread a single wing. They are mired in their own waste, and the stench of ammonia fills the air,” PETA explains.

For these reasons people everywhere are switching to vegetarian diets.

“Many are still alive while they are skinned, hacked into pieces, or scalded in the defeathering tanks.By switching to a vegetarian diet, you can save more than 100 animals a year from this misery,” adds PETA.

Ms. Bree, founder of Regina’s GLOW Wellness Club, adds that vegetarianism can be a healthier alternative for people. “There are a lot of issues with the American diet, and I wouldn’t say meat is bad for you, it’s not, but if you are trying to avoid hormones and chemicals it is a good idea. If you are vegetarian and still eating dairy, choosing organic products is also a good decision. I think being a vegetarian is mostly more of a moral issue, personally, the way that we currently raise the meat is unhealthy. So either choosing not to engage in that industry or choosing to support farmers and ranchers that use ethical methods is important.” said Ms. Bree.

It is hard to deny the horrible treatment that animals endure to become our food. We need to think, just like Shaun’s poster, “If you thought about the before, would you really want the after”?

Shaun O’Brien, a senior at Regina, graphic piece is about animal cruelty.
Q. Why is this topic important to you?
A. “This topic is really important to me because I love animals and I feel strongly that they do not need to be a food source for us.”
Q. What are you trying to accomplish?
A. “I decided to become a vegetarian after I watched a documentary, and I realized you can be a vegetarian and still be healthy. I became a vegetarian sophomore year. I wanted to be one because I just don’t see the need for me to eat meat, because morally I just don’t agree with eating animals, and I can live without it.”
Q. What was your inspiration?
A. “When I made this poster for my graphic design class, I wanted people to realize that their food comes from living animals with feelings.”
Q. Can you explain your visual?
A.  “I was inspired by a lot of similar posters and I wanted to recreate it in a way that wasn’t as gory but still got my message across. My visual depicts a piglet that is slaughtered to become a typical breakfast of eggs and bacon. He is a victim of our appetite.”